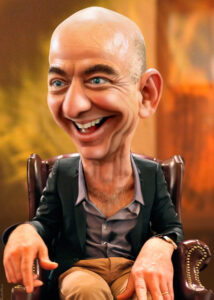 Jeff Bezos Success Story – Jeff Bezos has become a household name now, and why shouldn’t it be when the man blessed with extraordinary business acumen is hard to displace from the #1 spot on the world’s richest men list – a feat which Elon Musk achieved though only briefly.

Be it E-commerce, online video and audio streaming, newspaper printing or space exploration,

there is hardly any niche that Jeff Bezos has missed. In this success story post, we will take a good look at the journey of Jeff Bezos and the hard work and effort he put in to reach the pinnacle of success.

Born to a teenage mother on 12th January 1964 in Albuquerque, New Mexico, Jeff Bezos got his last name from his step father Mike Bezos- a Cuban immigrant. His mother Jacklyn Gise was only 17 years old when Bezos was born; his biological father Ted Jorgensen too was just 19 years old then.

To earn some extra cash, Bezos, still in his teens, spent a summer working at McDonald’s – he, however, did not like it at all. The following summer, he, along with his girlfriend, created an educational summer camp named “The Dream Institute” for students from fourth to sixth grade.

As a teenager, Bezos moved to Miami with his family, where he developed a passion for computers. He reportedly graduated valedictorian of his high school.

Bezos then graduated with a degree in computer science and electrical engineering from Princeton University in 1968. From the college days itself, Bezos has been very interested in finding out ‘how things work’. Apparently, this unending zeal to know and innovate has been the key factor behind his overwhelming success.

After graduating from Princeton, he worked a number of roles on Wall Street from 1986 to 1994. During this time, he worked with many renowned names such as D.E. Shaw, Bankers Trust and Fitel. Notably, Bezos became the youngest ever vice president of D.E. Shaw in 1990.

Jeff Bezos has always been a ‘risk-taker’, and so he quit his lucrative job in the financial world and moved to Seattle to try his hand at Internet market – which was still in its infancy stage in 1995 – by launching an online book store named Amazon.

Laying the Foundation of Amazon

Bezos officially registered the name of his online book store on 16th July 1995. Amazon (.com), which began from a small garage, gradually expanded operations into a 2-bedroom house. Within a span of just 2 months, the company was recording an average sale of $20,000 each week, thanks to the orders that were being shipped not across the United States, but to 45 other countries as well and that too without any press promotion.

Amazon went public two years after its launch and has been growing steadily ever since, outpacing any competitor that tried to pose a threat to its position. As you are already aware, the company did not stop at just books; by the end of 1998, you could also purchase CDs and DVDs from Amazon U.S. As time progressed, Amazon brought other items on its platform, such as clothes, toys, and electronics and entered into retail partnerships with many reputed stores.

With the vision to push digital mediums for reading, Amazon launched its first Kindle device, designed to mimic ink printed on paper, in 2007. The kindle presumably offered a great alternative to paper, with the option to download thousands of books at low cost, besides of course being portable and ‘less eye-straining’ than reading on conventional digital devices such as mobile phones and tablets.

The giant came up with its tablets as well in the year 2011, under the brand name Fire. The HD model of the tablet launched in the following year was designed to give tough competition to Apple’s iPad.

Venturing into the world of drones

Bezos entered into the world of drones through an experimental initiative titled Amazon Prime Air. Drones were deployed to provide delivery services to customers. At the initiative launch, Bezos had said that these drones could carry up to 5 pounds of weight and move within 10 miles of distance from the company’s centre.

Although the first successful delivery was made in December 2016, the company is still yet to launch a full-time drone delivery service for its customers in the US and the UK.

In the year 2017, Amazon acquired Whole Foods Grocery chain for a whopping $13.7 billion – an entire cash deal. With this acquisition, Amazon began offering grocery deliveries within 2 hours of successful order placement, though this is limited for Amazon Prime customers in certain cities only.

Bezos acquired The Washington Post in 2013 and its affiliated publications for $250 million. The acquisition meant the end of the four-generation reign of the Graham Family over ‘The Post Co.’

Jeff Bezos has been fond of space exploration ever since his childhood. In the year 2000, he converted this dream into reality by founding “Blue Origin”. The company aims at making space tourism affordable with the help of reusable launch vehicles. For nearly 15 years the company operated without much buzz. It was only in 2016 that Bezos invited journalists to pay a visit to the headquarters of Blue Origin, located in Washington.

He is of the vision that humans will one day colonize the space, provided that everybody has access to the innovative technologies currently in development.

Bezos has been selling $1 billion worth of Amazon shares each year since 2017 to fund the rocket startup.

Two years ago, Blue Origin revealed its Moon Lander and also announced that the company was conducting test flights with its suborbital rocket ‘New Shepard’ that aims to take tourist into space for a few minutes. Interestingly, Blue Origin is among the 13 space companies selected by NASA for collaboration on at least 19 projects to reach Mars and the Moon.

In his ambitious efforts to combat the effects of climate change, Bezos, in February 2020, launched a $10 billion Earth Fund. Under this fund, grants will be issued to scientists, activists and other organizations working for the preservation of nature.

Earlier, Bezos was often criticized for his lack of Philanthropic efforts. However, now the scenario is completely the opposite. One of the reasons behind this transformation is Bezos Day One Fund, which provides funding to existing NPO’s that cater to homeless families. Through this fund, the Amazon founder aims to create a network of non-profit tier-one preschools in communities with low-income individuals.

Notably, Bezos had founded this fund with his ex-wife Mackenzie, prior to their divorce. He committed a sum of $2 billion from his personal fortune at the time of its launch.

Quitting the position of Amazon’s CEO

In February of 2021, it was announced that Jeff Bezos will step down as the CEO of Amazon and instead make a transition to the role of the executive chairman by the end of the third quarter. Andy Jassy, who will reportedly be his successor, has been working with the company since as early as 1997. During those years, Jassy served as the technical assistant to Bezos.

With his ex-wife MacKenzie, whom he divorced in 2019, Bezos has three sons – the couple also adopted a daughter. MacKenzie and Bezos had met during their time at D.E. Shaw, where Bezos was serving as the senior vice-president and the former as an assistant. MacKenzie is now a novelist, best known for her works- The Testing of Luther Albright (2005) and Traps (2013).

Notably, MacKenzie played an integral role in the initial years of Amazon’s operations. Not only did she help create Amazon’s first business plan but also served as the first accountant of the ambitious startup. Jeff Bezos’s stake in Amazon came down from 16% to 12%, implying that MacKenzie’s stake came up to roughly $37 billion.

Post his divorce, Bezos has been dating television host Lauren Sanchez, with whom Bezos was allegedly having an extra-marital affair. The duo made their first public appearance together at the 2019 edition of Wimbledon.

Many entrepreneurs come and go but only a few visionaries leave a lasting impression with their vision and the zeal to grow and innovate. The founder of Amazon, Jeff Bezos, is the perfect example of entrepreneurs belonging to the latter category.

We hope that you find some inspiration from the journey and success story of Jeff Bezos. Thanks for reading!