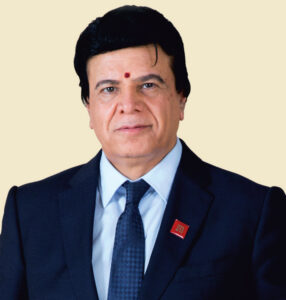 Chitkara’s Success Journey and Business Case Study – When Ashok Chitkara was running his small coaching institute in Chandigarh, little did he know how big an education icon he would become in the future. He prides himself as one of the few real “education entrepreneurs” in a time when only businessmen are running the education sector.

In this post, we will take a look at the journey of Ashok Chitkara and his wife Madhu Chitkara – who are best known for founding Chitkara University and Schools – and how the duo overcame all obstacles and problems that life threw upon them.

Born in the year 1975 and originally hailing from Delhi’s Ashok Vihar, Ashok Chitkara narrated in an interview that he missed the last date to apply for a master’s degree in education (M. Ed) at Delhi University. So he came over to Chandigarh and completed his Masters in Education in 1977.

He went on to complete his doctorate and wrote his thesis on “queuing theory”. He first met his wife and “partner in business” Madhu during his B. Ed days. Post his doctorate, he began teaching students at his home for a fee as low as INR 100 a year.

Ashok Chitkara was the star of Punjab University’s mathematics department from 1986 to 1998, by when he had become a well-known maths tutor, achieving the milestone of sending as many as 40 students to IIT each year. This is indeed a record in itself as at the time there was no other coaching institute in Chandigarh with such good results and figures. Apart from the IITs, his students swept most of the seats at Punjab Engineering College (PEC).

He spent 12 hours a day teaching at the University and 4 hours a day coaching students at his training institute, which he shut down in 2008 to lay complete focus on Chitkara Institute of Engineering and Technology (CIET), Rajpura and Chitkara University, Himachal Pradesh.

The Chitkara Educational Trust was established in the year 1998 with the aim of revolutionizing the way engineering and technology is taught at colleges. Through this education trust, Mr. And Mrs. Chitkara laid the foundation of CIET (now Chitkara University Punjab) in 2002, Chitkara University Baddi (2009) and two Chitkara International Schools – one each in Chandigarh and Panchkula.

The Chitkara campus in Rajpura, Punjab was affiliated with Punjab Technical University (PTU) until 2010. The year 2011 marked the first year of the Punjab campus as an independent university.

Ashok Chitkara always had a burning desire to be an entrepreneur. In an interview he stated that he quit his thriving coaching business to focus on his entrepreneurial ventures. He often pondered upon the question that if he can teach at a university, why can’t he open up his own?

Although the semester fee may seem high when it comes to Chitkara University, Ashok says that he is not doing it for the sake of minting money. He says, “Unlike other colleges, we do not charge any capitation fees and have surrendered our management quota as well. We believe in the motto “honesty is the best policy” and we are not here to make money.”

Strict rules at the University

In one of the interviews, Ashok Chitkara said, with a smile on his face, that the students refer to the university’s director of administration as the “superintendent of the Chitkara jail”. This is because of many reasons such as the option for parents to check their ward’s daily attendance; no provision for students to leave before 4:20 PM (the regular dispersal time), no bunking, no kind of ragging, early curfew for girls’ hostels, CCTV cameras in all classes, labs and hostel corridors.

The expansion and renovation projects

Although University campuses keep undergoing slow renovation, Chitkara University has been expanding at a very steady rate. The administration has added many modern-day facilities, more blocks, hostels, labs and sports arenas to its campus, especially the Punjab one which now looks completely different as it used to 5 years ago. Chitkara University is among a handful of institutions offering a 4-year full time program in Optometry.

The future of Chitkara University

The university has been maintaining a 100% placement record for the last few years. Many reputed national and international firms visit the campuses each year to pick skilled graduates. Ashok Chitkara has handed over the baton to his son Mohit Chitkara to look over the future and growth of the Chitkara University and School network. He is presently serving as the vice-president of the Chitkara Educational Trust.

We hope that you got to know a good deal about the University and the founders via this post. Keep checking out our blog to stay updated with the marketing case studies of many renowned companies.